Being welcomed by Mozambique 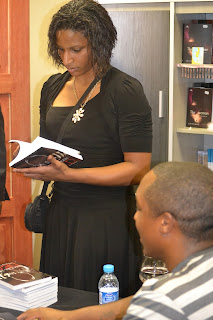 For this 'Shoulda Been Dead' tour we are going all over Africa.

An amazing Country from what I have seen so far. Yesterday we held  an event in Mozambique and then we traveled today to  Botswana to hold an event here, I will tell more about that tomorrow. Mozambique from what I ate there are foods similar to Portuguese food (From Portugal).

Someone please correct me if I am wrong but it seems that the typical Mozambican food is seafood. There is the ocean nearby so everyone eats all type of seafood. There are even people who stand by the ocean toward the evening with a fresh catch of fish and just sell it, out in the open. So Unique. 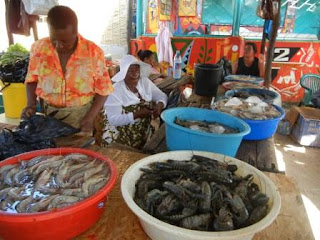 Here is also a picture of one of the means of transport here in Mozambique. The back of a pick up truck... Take a look. As we were driving around the City today I saw a bunch of people hitching a ride in the back of this truck. I was told that that is a quick way for people to get around. Since there is too many people for the regular public transport. 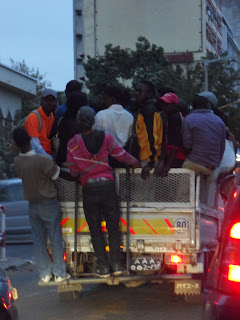 Mozambique received us with such open arms. Here in Mozambique they received us SOOOOOOO well. You wouldn't believe it, They made a party at the airport.

As soon as we stepped foot outside the door of the airport there was like 50 people clapping and singing and dancing for us with their traditional clothes on. We were super shocked/ shy at the same time cause we were like what is this. There was even people (other people on the street/taxi drivers/those leaving the airport with suitcases in hand stopping to look and take pictures of everything.

They were all looking and wondering who are those "important" people that they are making this huge party for... (Great evangelism tool) 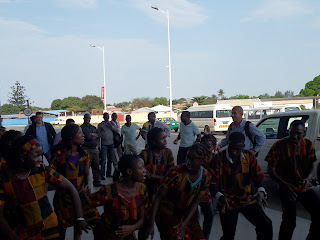 Take a Look at them celebrating...

Before this, As we were getting into the plane to go from Namibia to Mozambique we noticed this... I had to take a picture.
Look 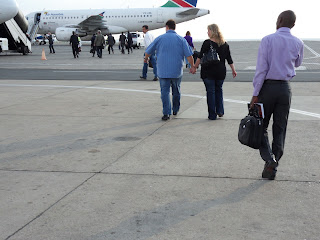 This guy who was walking in front of us has a 'Shoulda Been Dead' book in his hand. Maybe to read in the plane.  How Nice... We were so happy when we saw that.

But at the event in Mozambique (Which went great by the way) we had about 10,000 youth show up for this movement against drugs. 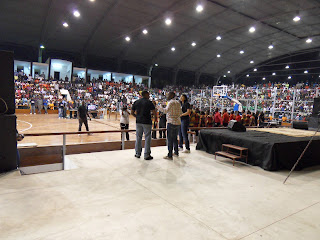 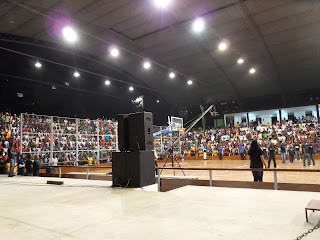 We even got to join them at the event in wearing traditional styled clothes made specifically for us by a Youth Power Group member of Mozambique. How special, We absolutely loved it. Thank You all for your kindness, Mozambique.

Keep posted for more blogs coming soon, today we are in Botswana, Africa. I will let you know more about their foods, culture, the events held here and more. Stay posted for more on Botswana and the upcoming Countries.

God Bless
From where I am to you, Elise

Popular posts from this blog 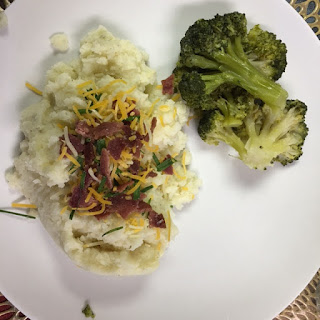 Went to Chili's a little while ago and as a side had their loaded mashed potatoes. I fell in love with it but couldn't stop thinking about how simple and cheap it is to make for myself at home. Very simple and yet delicious to go alongside any of your great meals. Here is how its done. Chili's Loaded Mashed Potatoes Servings: 4 Servings Prep Time: 10 minutes Total Time: 25 Minutes Source: Elise Jackson Ingredients 6 large potatoes 1 tbsp sour cream 1 tbsp butter 2 oz milk salt and pepper to taste As much as  you want, this is to sprinkle on top -full pieces of bacon strips or bacon bits -chives -shredded mozzarella and cheddar cheese Directions If you are using bacon strips, go ahead and place them in the oven on 400F for about 15 minutes or until very crispy, remove from the oven and set aside to cool. Once cooled, crumble into tiny pieces. Place a pot full of water on the stove on high heat and bring it to a boil, while i
Read more 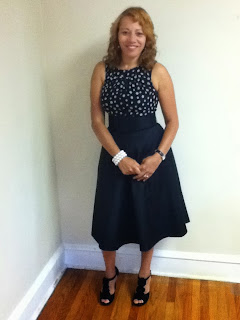 Mommy Grandma Here is my beautiful mother and my grandmother both of whom I love dearly. Oh, yes. And look at my darling twin sister. My mirror, my look alike. which one am I? Do you know? Well my mom and grandma were  both born in Furna - Brava, Cape Verde also known for its portuguese name as CaboVerde. A portuguese speaking Island off of the coast of West Africa. Me in CapeVerde In CapeVerde just like in any other Country there are many traditional dishes such as 2 of the main ones. Cuscus - a breakfast bread and Cachupa- a heavy soup for lunch. These are 2 of my favorite Capeverdian foods along with others such as funginho, gigacida, and the list goes on. Cuscus is a breakfast food. For those of you who don't know what it is, its similar to a corn muffin or a corn type of bread. It is made fresh and eaten whilst hot off of the stove spread with loads of butter to melt nicely on top. I love eating this with my favorite rasberry tea. Some of you might hate i
Read more

Did you know this about eggs? 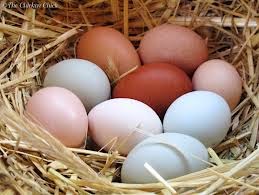 Eggs are one of the most popular used ingredients in todays society. We use them for a multitude of dishes from baked goods to savory meals. They play an important role in most dishes. But there are a few tips that you need to know about them before you eat it. Did You Know? Eggs have an extremely high amount of cholesterol, they run from about 165mg - 250mg of cholesterol per egg. Your total cholesterol intake per day should be no more than 200mg - 300mg for a healthy person. So by you just eating 2 eggs you have already passed your cholesterol levels for that day. Not to count other things that you eat that contain a high amount of cholesterol such as dairy products like milk, yogurt, ice cream, cheese etc… All of these can cause you to have high cholesterol especially when it comes to eating too much eggs. Did You Know? When cracking an egg open you should remove the Chalaza. The Chalaza is the foggy colored string like shape in your egg. There are many
Read more